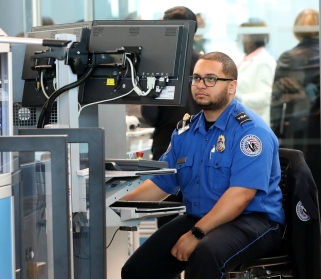 THIS WHOLE ESCAPADE always elicits mixed emotions within me.

On the one hand, I feel a tinge of embarrassment melded with aggravation.  On the other hand, I often have to stifle a laugh.

My shoes and belt are taken as well as the contents of my pockets—at least for the moment.  My slacks illustrate Sir Isaac Newton’s law, and I’m inevitably forced to hold them up with at least one hand in order to prevent certain humiliation.  Total strangers give me the mandatory “run down” and then I’m wanded.  Next comes the usual litany of pointed questions—“Did you pack your own bags?”  “What is your purpose for travelling abroad?”

This particular trip had all of these expected elements plus an added bonus.  It seems my photography backpack harbored some “suspicious” items.  Vigilance demanded further investigation.

Airport security had just run my bag through the x-ray machine.  “It’s my camera,” I said flatly, but the TV monitor prompted a more thorough look.  The authorities ran my bag through the x-ray machine a second time.  Then a third.  Each time, the officers would huddle around the screen, frown, and then shake their heads in obvious disapproval.  Finally, they pulled me aside as insisted that I open my bag.  For a minute, I fully expected my camera to be glowing neon green from that triple dose of radiation it had absorbed.

I keep a coiled wire with a laptop lock in the bag.  I intended to secure my computer when I was away from my room in Tanzania.  Oddly enough, when I looked at the x-ray of the wire next to my camera batteries, it kind of looked like—dare I say it—like a miniature bomb.  The airport security folks evidently thought the same thing.  Since they tend to frown on bombs in luggage, they really gave me the third degree then.  “Where are you from?”  “What’s your mother’s maiden name?”  “Who was your second grade Sunday school teacher?”  “Do you floss every night before bed?”  “Who won the World Series in ’56?”  “What is the square root of 374?”

I began to unpack my camera bag and reveal its contents.  TSA officials studied each item, but then finally returned my bag and allowed me to pass on through.  Whew.

When I arrived in Tanzania some 28 hours later, I discovered that security had also gone through my checked bag, because I found this note enclosed:

To protect you and your fellow passengers, the Transportation Security Administration (TSA) is required by law to inspect all checked baggage.  As part of this process, some bags are opened and physically inspected.  Your bag was among those selected for physical inspection.  During the inspection, your bag and its contents may have been searched for prohibited items.  At the completion of the inspection, the contents were returned to your bag.

At first this whole process seemed unnecessary and intrusive.  “Why must someone pour over my personal items?  Good grief, Charlie Brown!  I’m not some radical terrorist; I’m a just a gospel preacher!  I pay my taxes and try to drive the speed limit.”  Probably the most radical thing I’ve ever done is sneak out of Farrow dormitory late one Friday night when I was a senior at Freed-Hardeman to buy a couple of barbeque sandwiches.

Rifling through my personal belongings was offensive to me.  From my perspective, it said that I might not be what I appear to be.  I could be some subversive with violent intentions.

But I endured this whole episode for one reason.  Safety.  Read that word again slowly—S A F E T Y.  911 was a rude wake up call for America.  It reminded us as a nation us that not everybody shares our political, moral, and religious convictions.  It screamed at us to rethink the whole policy of air-travel security.

I wish some of my brethren could appreciate the significance of this truth.  Many elderships welcome newcomers to a congregation’s fellowship without so much as a question as to their marital background, their beliefs, or their religious convictions.  In essence, they say, “Ya’ll come…!  We trust you…”  They refrain from asking personal questions in this day of political correctness because it is viewed as being too invasive.  “You can’t ask folks questions anymore,” we’re told.  “They might get upset and not come back.”

Then one day, some doctrinal bomb explodes within the local church.  Ka-boom!  Dozens are wounded, while others are dazed and hurting.  The body is divided, bloodied, and splintered.  It is a terrorist attack (Mat. 7:15-20; Gal. 2:4; 2 Pet. 2).

Tragically the whole frightful episode might have been prevented had the shepherds taken the time to “go through the bags” as it were of potential new members.  “Can you tell us about yourselves?”  “Where did you worship before you moved here?”  “When, and for what reason, were you baptized?”  “Could you tell us briefly about your marital status?”

False doctrine isn’t introduced into a congregation all at one time, brethren.  That’s too obvious.  Cunning terrorists know that and they how to smuggle stuff piecemeal—just a little bit at a time (Jude 4ff).  A statement here, a devotional there, a couple of phone conversations there, a sharing of some liberal blog, etc.  They bring in heresy in something as innocuous as a preacher’s camera bag.

Had the elders introduced themselves and created a loving, safe, but firm environment to talk to new members about their moral, doctrinal and practical ideas, they might have prevented the disaster all together.  Division could have been averted.

When my family first considered worshipping with one congregation in Indiana years ago, one of the shepherds invited me out to lunch.  He created a safe atmosphere to ask questions and to inquire about what my family taught, believed and practiced.  He spoke on behalf of the eldership at large and welcomed us to the congregation with the understanding that error in any form would not be tolerated.

At the time I felt a little peeved.  “This wasn’t necessary,” I thought.  “Why did he have to go through my luggage?”  “We’re good, faithful Christian folk…”

In retrospect, I look back now and recognize why the shepherds took this step.  They wanted to impress upon the Benson family what they would, and would not tolerate.  They wanted to communicate their stance on unity (Eph. 4) and harmony within the congregation.  They understood their role as overseers of the local church (Acts 20:28ff), and they were determined to protect the body of Christ from attacks without and within.

Elders, are you asking questions?  Are you active in protecting the flock over which you shepherd?  Do you take the time to introduce yourselves to new sheep?  Do you ask questions in a non-threatening environment, in a loving way, to communicate your concern for the precious body of Christ?

Christian, the next time you’re considering placing membership with a congregation, don’t be too upset if the church leaders ask some questions about you and your loved ones.  They love your soul and the souls of those with whom you hope to worship.  They’re not trying to be busybodies; they just love the Bride and want to keep her pure and free from injury.

2 thoughts on “Is the Baggage Check Really Necessary?”