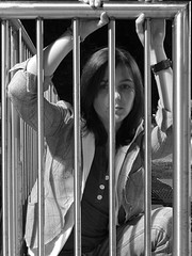 A MAN BREAKS the law and is put in jail for his crime.

Once inside, he plunges even deeper into trouble; he violates some stringent code of prison behavior.  So how does the warden and criminal justice system handle his latest misconduct?  Often times the offender, depending upon the severity of his deed, is placed into solitary confinement.  The inmate is purposely isolated and cut off from his peers; he is denied any opportunity to interact with his fellow convicts.  He is unable to see or hear from another human being until and unless the administration decides he can.  It’s “lockdown” for days, weeks, perhaps even months on end.

It occurs to me that a prison is not the only place where folks employ solitary confinement.

A husband and wife have a spat.  The disagreement reaches a heated, fever pitch and both members are left wounded and hurting.  How does the couple address each other’s rude conduct?  At least some married people I know force one another into isolation.  First they engage, then they withdraw.  They put each other in a sort of mental “cage”.  They stop talking (Prov. 15:23); they withhold love, affection, and marital intimacy (1 Cor. 7:1-5).  They sequester themselves and refuse to interact until the other humbly (and perhaps even repeatedly) apologizes and repents.  It’s verbal, emotional, and physical lockdown until such time one mate decides the length of detachment has been long and harsh enough (cf. Mark 9:33-34).

I’m certainly no expert on how to handle discipline issues in American jails, but as far as I can tell, solitary confinement—at least at home—is little more than a selfish form of cruel and unusual punishment.  And it only serves to divide couples to an even greater extent.  Words that were shared so freely are now non-existent.  There is little or no attention, no tenderness, and certainly no whispers of care and mutual fondness.  Even though there are two people, sharing the same last name, living in the same house, they feel lonely, removed and terribly alone.  What’s even worse, if at least one of the spouses doesn’t eventually initiate some type of contact and communication, the two will often severe the relationship entirely.  As one preacher friend often reminds me, “What we will not talk about, we will divide and divorce about.”

What about you, good reader…?    Have you put your mate in jail?  Is he or she in solitary confinement?  The Bible says, “Therefore, putting away lying, ‘Let each one of you speak truth with his neighbor,’ for we are members of one another.  ‘Be angry, and do not sin’: do not let the sun go down on your wrath, nor give place to the devil.  Let him who stole steal no longer, but rather let him labor, working with his hands what is good, that he may have something to give him who has need.  Let no corrupt word proceed out of your mouth, but what is good for necessary edification, that it may impart grace to the hearers.  And do not grieve the Holy Spirit of God, by whom you were sealed for the day of redemption. Let all bitterness, wrath, anger, clamor, and evil speaking be put away from you, with all malice.  And be kind to one another, tenderhearted, forgiving one another, even as God in Christ forgave you”  (Eph. 4:25-32).

Putting your spouse in solitary only means that both of you will suffer.  It’s a punitive form of torture where both the warden and inmate experience undue pain.