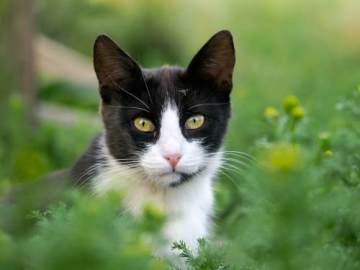 SHE SHOWED UP on our front door step.  Even though she was outside at the time, I could hear her distinctive “meow” throughout the house.  We had a cat at the time, but Lucky’s voice has a much lower tone and pitch, so I knew it wasn’t him.

I stepped outside to introduce myself to our new guest.  She made a couple of quick circles around my feet and I nearly tripped.  She was thin, small, black and white, and had a light pink nose.

I’d studied feline dialect over the past twelve years so I could tell she was hungry.  I walked back into the house, stole a cup of Meow Mix from Lucky’s bag, came back outside, and then poured her dinner in a small heap on the concrete.  She devoured it as if she hadn’t eaten in days.

She stuck around our house for the next few days.  I dutifully fed her—morning and evening, but couldn’t help wonder whom she belonged to.  Surely her owners would be concerned as to her whereabouts.  She didn’t have a collar, and I feared for her safety in light of our proximity to the highway.

On Friday as I was leaving for the office, I pulled up to the intersection in front of our house and noticed a homemade placard which had been duct-taped to the STOP sign.  There was a photo of this very cat, and then the following information:

I instantly knew two things—1) the cat’s name and 2) her owner’s phone number.  I picked up my cell and punched in the ten digits.  Oddly enough, I got an old country boy several miles away.  He seemed aggravated that I had even called and said that he had never owned a cat in his life.  I confirmed the phone number with him; it was correct.  Apparently, Josephine’s owner has posted the wrong phone number on the sign.  I apologized to the man and hung up.

Lanore and I talked about what we should do on Saturday.  She suggested that I try punching in different combinations of the last four digits of the phone number.  I switched the 2 and the 1 and pressed “call.”  A lady immediately answered and said, “Hello.”  I said, “I’m calling about a cat…”  Before I could finish my sentence, she interrupted and announced, “Yes!!!  That’s MY cat—that’s Josephine!”

I gave the lady directions to our house and within two minutes she was pulling up in our driveway.  I carried Josephine over to the car.  Her owner literally ran up to me, snatched Josephine out of my arms, gave me a huge hug, and then began to weep.  “I can’t believe it!” she sobbed.  “I just knew something bad had happened to her…”  Talk about tears of joy!

As it turned out, Josephine’s owner had let her outside late Tuesday evening, but she didn’t return as usual.  The old cat had wandered out of the neighborhood, crossed the highway, and then decided to camp out on our porch several blocks away.

This whole occasion got me to thinking.  I wonder exactly what happens in heaven when folks repent and are restored to Christ?  What kind of party does the spirit world hold when a wayward brother returns to his first love?  What’s involved in “joy” when a sinner returns home?  Jesus said, “Likewise, I say to you, there is joy in the presence of the angels of God over one sinner who repents” (Luke 15.10; cf. v. 7).