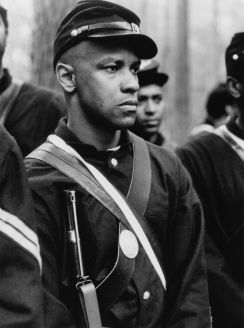 IN A TIME of crumbling traditions and values, in a day of dangerous streets and collapsing homes, people long for stability and hope.

They need to catch a glimpse of the powerful High Kings who loves them.  And the King wants His knight-companions at His side.

In the movie Glory, one scene portrays a Union regiment of freed slaves, the 54th Massachusetts, sitting around a campfire on the night before the big battle.

The fire crackles, the cicadas chirp, and several of the men hum a spiritual in union as they clean their rifles.  They know that on the morrow their lives will be on the line, and they must seize the day.

One soldier looks up from the fire at his fellows, willing them to give him eye contact.

That says it all, doesn’t it?

We’ll square our shoulders and–for the sake of heaven–we’ll look death and hell square in the eyes.

And it will be this generation that gets it done.

To paraphrase Churchill, when masculinity has endured a thousand more years, may they say that this day was among its finest hours.

Listen to the apostle’s battle cry: “The night is almost gone, and the day is at hand.  Let us therefore lay aside the deeds of darkness and put on the armor of light” (Romans 13:12).

Stu Weber, All The King’s Men, “Rusty Knights in a Hostile Land,” 52