HE HAD BEEN studying the Bible with a member of the church for a few weeks. Even though he was brought up in a religiously devout home, and even though he sincerely believed for many years that he was saved, in light of his recent examination of the Scriptures, he’d come to the unsettling realization that he was, in fact, never saved at all (cf. Prov. 14:12; Jer. 10:23). Yes-he had been sincere, but no-he’d been wrong (cf. Acts 26:9).

He was on his way to the church baptistry to be immersed in accordance with the pattern set forth in the New Testament (Rom. 6:3-4; Acts 8:36-38), but as he was driving down the highway towards his destination, a truck suddenly pulled out in front of him, the two vehicles collided, and he was hurled out of his car and killed.

This is a very popular scenario among our religious friends. Whenever a child of God refers to the necessity of baptism, some antagonists unfurl this revered storyline as though it were Scripture itself. “Are you telling me that Almighty God would consign him to eternal hell just because he wasn’t immersed in water?!”

God wants EVERYONE to be saved. If you think about it, this oft-told fictional tale is actually an indictment not only of the Word of God, but against God Himself. The under-the-surface theology goes something like this: 1) You claim that God requires baptism, BUT since 2) He didn’t protect this imaginary believing-seeker on his way to the water and allowed him to die in the car accident, then 3) not only is your understanding of the nature and necessity of immersion flawed, but your view of Jehovah is flawed as well.

What our friends fail to realize is that the scenario actually pits God against His own doctrine of baptism–even though immersion was His idea (Mat. 28:19-20), even though He cannot lie (Tit. 1:2), and even though immersion in water is specifically commanded in the New Testament (Acts 10:48) in order to put one into the body Christ (Gal. 3:27; cf. Eph. 5:30).

Now ponder Psalm 119:9 and then ask yourself one essential question: Can God ever save an individual who never learns, or is taught, Whom to believe in (i.e. Jesus), or how, or what to believe about Him (Heb. 11:7; John 8:24)?

Imagine that a Christian is scheduled to teach a series of five Bible studies to a very moral,2 albeit aged man who has been recently diagnosed with a serious heart problem. In the evening just before their second lesson together, when teacher and student are set to study the subject of faith (cf. Jn. 20:30-31), that elderly man suffers a massive heart attack and dies–without ever having the opportunity to hear the story of Jesus and believe on Him (cf. Acts 11:17; 8:34-39; 16:31). Yes, he learned in the first lesson that the Bible is the inspired Word of God, and that the New Testament is the final and only authority (Mat. 28:18; Col. 3:17) in all matters of life and godliness (2 Pet. 1:3), but no–he wasn’t taught in that initial study the identity or deity of Jesus Christ (cf. Isa. 53:3ff; Acts 8:37) and therefore never had the opportunity to believe on/in Him because his faith was contingent upon hearing the word of God (Rom. 10:17; cf. Heb. 11:4, 6-7, 8ff).

Question: Since some take the liberty of removing and omitting BAPTISM from the plan of salvation in order to save the sincere individual who was killed in the car accident, then by this same logic are they not also permitted to remove FAITH from that very same divine plan since the sincere, moral man in the second scenario died of a heart attack before his belief in Jesus? If not, why not? If it’s possible for the Lord to arbitrarily save one man without full obedience (cf. 2 Kgs. 5:9-14)3, then why isn’t it also possible for Him to save another man without any obedient faith (Heb. 11:6)? Ironically, I’ve never heard anyone use the old sincere, moral man scenario and then argue, “What if a sincere, moral person is not yet taught the Whom, what, and how of faith in Jesus,4 but then he dies from a heart attack? Do you mean to tell me God would send this man to eternal hell for not believing?!”

God pleads with everyone NOT TO WAIT to be saved. Please pay attention to the following passages and then answer the questions which follow:

1 There is no inherit power in the water of baptism itself. Our faith is in the One (Jesus) who requires baptism, not in the water itself.

2 Cornelius is described in Acts as a devout, just, God-fearing, generous, and praying man (Acts 10:1-2, 22), but HE STILL NEEDED to hear words (about Jesus and His will) by which he and household would be saved (11:14). What if that morally upright, religiously devoted man had never heard, believed and obeyed the gospel (10:34-48)? Would he have been saved by his own goodness alone (cf. Isa. 64:6)?

3 HOW MANY times did Naaman have to dip in the Jordan in order to be cleansed of his leprosy?

4 When the people of Israel complained against God and Moses in Num. 21:4ff, and then the Lord sent venomous snakes among the them, WHAT HAPPENED to many of those individuals BEFORE Moses constructed the bronze serpent on the pole and then told them HOW to be saved? Did anybody die before belief? Was any snake-bitten person saved by believing without the action of looking (cf. Jn. 3:14)?

I HAVE A vivid recollection of that day.

My wife came in the room, turned on the TV set and then spoke in shaken tones.  She said, “They’ve flown a jet-liner into one of the World Trade Center towers in New York…” For the next several hours I sat transfixed before the television and watched in horror as the events of 911 unfolded. 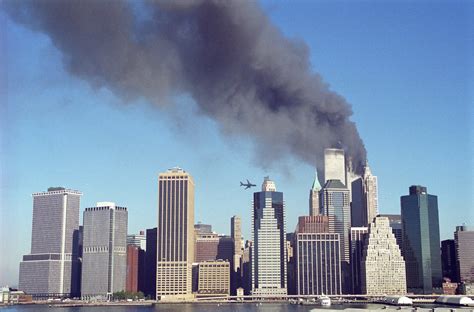 Twenty-one years after that dreadful day, some Americans, like myself, look back on September 11 with intense emotion. We recall those gaping wounds in the sides of the towers. We remember those ill-fated flights and how they were intentionally slammed into the very icons of our nation. We remember those thick plumes of noxious smoke as they bellowed out of the top of those lofty skyscrapers and into our collective conscience. We remember our own anxiety and ponder what must have raced through the hearts of fellow-citizens as they contemplated the end of their earthly existence and the brevity of human life. We remember the internal shock of watching the first, and then the second tower plummet to the ground. We remember those feelings of helplessness and despair as lower Manhattan was engulfed in ash and debris.

But may I suggest, dear reader, that there is a far more terrible tragedy that warrants our joint remembrance.